ASD to close or not to close it

I am 72 years old in great shape running 5Ks and not sure what to do next, six months ago my doctor discovered that I have a 1 inch hold in my heart after an echocardiogram never notice (asymptomatic) and because of the pandemic they couldn’t do more tests so after six months they did a second echo and a catheter into my heart and measure the hole and told me they can close it with an amplatzer occluder and will be schedule for October I went for a second opinion, the new cardiologist told me that because I’m asymptomatic and besides my right atrium been enlarge functioning normally and everything else including lungs work just find he recommended to wait for one year and check it again with another echocardiogram, I really don’t know what to do after reading some bad experiences, my question is should I get a third opinion?

Note: I had migraines since I was 11 years old with auras in both eyes real real bad now I have it only once a month and real mild, now I know was because my ASD

Your input will be really appreciated

Welcome to the community David! It’s always challenging to make health decisions like this, but even harder given the pandemic.

You can do a search for that specific closure technique here. But realistically, which cardiologist were you more comfortable with and trust more? Sometimes it’s just as simple as that in making a decision.

Thank you Sharon for your advice and support and after reading all comments and experiences I was able to make a decision with my cardiologist and for now I’ll wait one year and get another echocardiogram, hopefully I don’t have to do it sooner

I now have a 25mm Gore Septal Occluder for a PFO closure and I have no side affects and I feel great.

I am 53 years old but at the age of 50 yrs I had a Stroke completely out of the blue as I am also fit and healthy with no issues hiking 15-20miles when I like, Thankfully I am one of the lucky ones and have recovered 99% movement and speech that I lost from the stroke, because of my age and health the doctors wanted to try and find out why i had the Stroke.

It was not until they did a bubble echo cardiogram that they found my hole in the heart which was 15mm and classed as large! so they used a 25mm occluder to close it.

As a child I have always had migraine with aura and sickness which started weekly but as I got older they were maybe every other month or so.

With my hole I had a large shunt (only a bubble echo will show this) which means blood passes between chambers through the hole, which actually means any “debris” in your blood such as small clots which we all get from sitting down too long or flying on planes or dehydration will actually pass through the hole. This for me meant that any clots that appeared in my right heart chamber destined to be filtered by the lungs did not pass go and went straight into the left chamber and onto my brain causing my stroke. So my hole in my heart which gave me no issues at all for exercise is very likely 99% to have caused my stroke.

I have subsequently had a CT and 2 x MRI of my heart and the scan come back clear from heart disease… so I am afraid I would have to say you are more likely to be at risk of a stroke because of your hole in the heart if its location bridges the natural flow of the blood from right to left and so bypasses the lungs that naturally filter clots in our system.

It is possible to prevent a stroke for someone with a hole in their heart with drugs but my understanding is the odds might be against you if your hole that is 25mm unless your location is less of a concern.

A few years ago severe migraine suffers with holes in their heart had them closed by the UK NHS. This has been stopped due to cost but I can say I have not had one migraine or a loss of the eyesight you get ahead of a migraine since my occluder has been fitted?

You can read a little more of my story at www.stepoutmoor.com

Hello,
At 59 years old I had what I thought was a migraine. I had severe head pain on the left and lost the sight in my left eye for about 30 mins. Followed up with Primary who suspected stroke and sent me to the ER. Lots of test showed nothing typical for stroke. My arteries were fine. I have permanent loss of partial sight in the left eye and was determined to be an Occular stroke. After several visits with the neurologist, he sent me for a Bubble study with contrast and echo. This showed a large hole with a severe right to left shunt of bloodflow. I then saw an interventional Cardiologist who put me on Meds - calcium channel blocker, aspirin,plavix, statin. Add on imipramine from Neurologist.
I did this for almost 2 years but symptoms worsened. Arrhythmia, blood pressure breathlessness, fatigue, headaches.
I was recommended to another Cardiologist. They did a TEE which showed a large hole and enlargement, also another bubble echo, showed a crazy amount of shunting. He recommended closure because of the high risk or stroke. It took 2 tries Because the hole had become so large but he was able to close it with the Amplatzer Occluder percutaneously. I was very relieved not to have open heart repair.
My advice is to trust your instincts. Be honest with yourself, it’s really freaky to find out you have something like this, but you know best how you feel. If you need to, see another Doctor. It will be 2 years for me this December, and I feel so much better. I know there are no guarantees and it’s not the same for everyone, but personally, I am so relieved to have it closed.
Good Luck to you and Listen to your heart.
Haha

We’re all different. But I chose closure based on the following:

Main reason -I believe an un -closed ASD carries chance of sudden cardiac death??. I look back in horror at my 5k and 10k runs now, when I didn’t know I had it. I certainly wouldn’t have continued running once I knew.

It’s your decision ultimately, these were my personal reasons that may not apply. But I chose to get fixed even though it meant open heart surgery (device was not possible due to hole location), and I’d have chosen it even quicker if catheter op

Thank you, I’m going to Rochester Minnesota for my 3rd opinion and I’ll continue posting the results.
Again, thank you from the bottom of my heart I need to go back running and hiking real bad it’s my life

Just a note, I’m not taking any medication and both cardiologist didn’t prescribe not never an aspirin the shunt left to right is very small even with my 2.2mm hole

I had the PFO. It went undiagnosed and missed by multiple cardiologist. It was not a people’s until one day it was.

With any “hole in heart” is is really dangerous. Anytime there is right heart pressure it will allow dirt unoxygenated blood to flow from one chamber into the other and by pass the lung which not only oxygenates it but also cleans mini blood clots out. A healthy body naturally produces 1000s of mini blood clots a day.

This dirty unoxygenated blood mixed with clean blood gets sent to every organ and your brain. It can cause a TIA or organ failure.

Last year I had attacks out of the blue that mimicked a stroke and heart attacks at the same time. My heart was healthy except the undiagnosed birth defect. 2 hospitals in Vegas missed it.

Small things cause right side heart pressure.: bathroom tasks, extortion (like running or walking), pain, sniffing, coughing, and even a simple sneeze.

I had the same device they recommended to you put in. It was Done by a catheter. It was a simple fix had it been caught earlier in life, I would be much healthier. From what I learned it causes premature death, fatigue, and breathing issues. It is typically hereditary.

Having the hole in heart you are limited in activities you can safely do ie scuba diving or high elevation trips.

For you to have been given an echo to begin with tells me you are not asymptotic. Typically they need to do a bubble echo to locate a hole. It is rare for a doctor to just randomly look for one in adulthood even with symptoms.

I also learned majority of people with migraines their entire life has a PFO.

Best video to describe the device they are recommending: 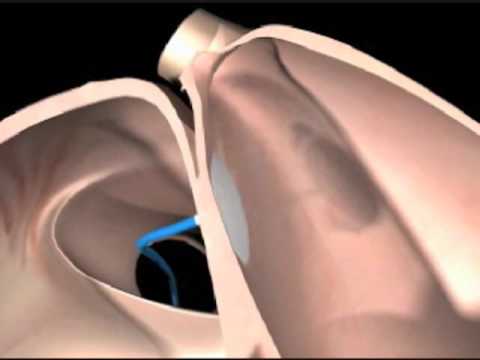 A transcranial Doppler can be used to listen to how many bubbles make it to the brain. It is administered like a bubble echo but headgear picks up the bubble sounds in the brain.

On mine, every bubble went to the brain. UCLA said it was the most they ever found. I had TIA’s and what mimicked heart attacks.

I had a secondary birthdefect. I had a cord hanging down in my heart infront of the flap. It got long enough that it kickstanded the flap open.

The TIA and going paralyzed on left side is the worst feeling in the world. Luckily, the choking from not getting oxygen blood would help cord to flow back out… bad part was from my first attack until the PFO was closed I had series of attacks. The PFO was completed missed by multiple different hospitals. (I went where ambulances took me). Multiple cardiologist missed even with full heart work ups.

I too had migraines my entire life.

As you are getting cardiologist input make sure they specializing cogential heart conditions. I found out the hard way clinical cardiologist are not very educated in this and give bad recommendations,

So sorry to hear how much you suffered with this. I understand how awful it is to have no diagnosis. I believed the Doctor who said he found nothing wrong. Then after tests were repeated several years apart, I started to doubt myself and think that maybe I was imagining symptoms or as was suggested by the Cardio, “experiencing anxiety”. I am very glad to know that you are sorted out now and wish you well. Keep in touch and let me know how you are doing. Take care and thanks for sharing.

I Sent from my iPhone